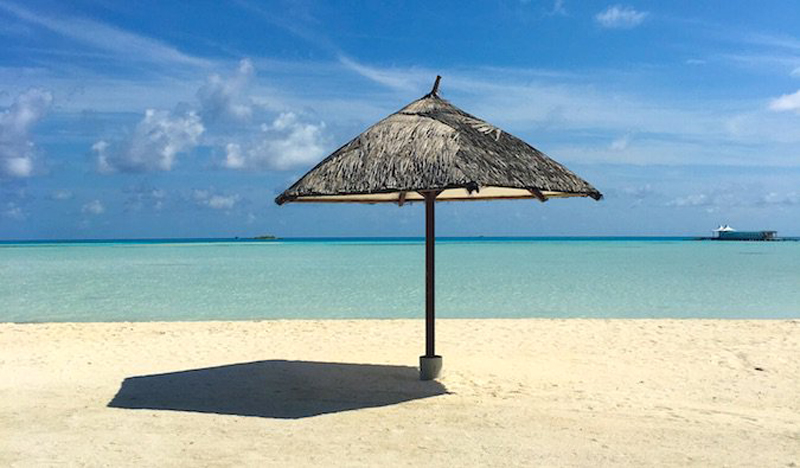 Seaside getaways are the best. However, hordes of tourists can make a day at the beach feel like, well, anything but. Want to escape the crowds? Turn your attention to these under-the-radar destinations that promise fun, sun and space to sprawl out. Our advice: book ASAP (before everyone hears about them).

Mykonos and Santorini lure jetsetters from across the globe. Equally enchanting—and not swarming with out-of-towners—is Sifnos. With its white-washed villages, unspoiled beaches and delicious food scene, this idyllic island gives visitors a true taste of Greece. Feast on octopus bruschetta and feta pie at family-run tavernas. For a hands-on experience, consider a traditional cooking class.

When you think of French Polynesia, you probably envision Tahiti or Bora Bora. “Tikehau is a remote coral atoll with two small resorts,” says Christie Hudson, senior communications manager at Expedia. Pinks sands and crystal-clear waters are the primary draws. And if you’re looking to unplug, there’s no better place to turn your phone off the entire trip.

What if we told you there was an off-the-grid island with animal species you won’t find anywhere else? Nosy Ankao is an eco-wonderland, where you can go lemur trekking (keep an eye out for the critically endangered golden-crowned sifaka) and deep-sea fishing. In terms of accommodations, the solar-powered villas at Miavana are definitely the move.

This little speck off the coast of Sicily isn’t wrought with sugar-fine beaches. “Perhaps that’s what has kept it under the radar for so long,” says Hudson. There are sheltered bays and volcanic sights waiting to be explored by private boat. Of course, no trip to Pantelleria is complete without enjoying a glass (or two) of sweet Passito wine.

Palau comprises 500 volcanic islands in the western Pacific Ocean. It’s also a mecca of world-class diving with incredible sites such as the Blue Corner. So, how does this awe-inspiring archipelago remain unburdened by tourism? “Flights from the U.S. are pricey and take upwards of 20 hours,” says Hudson. Time to penny-pinch and/or rack up those credit card points.

A far cry from the glitz of Côte d'Azur, Il de Ré has loads of charm and is surprisingly low-key. It’s home to some of the oldest vineyards in the country plus cycling paths, secluded dunes and quaint outdoor cafés. Spend your days soaking in the sunshine, sipping vino and feasting on freshly shucked oysters.

If the breathtaking beauty of Thailand beckons you, but the massive number of vacationers is a turnoff, Hudson suggests Palawan. Be sure to book a boat tour through the underground canals and huge limestone caves of Puerto Princesa Subterranean River National Park. Venture to Secret Lagoon for a clandestine canoe excursion.

Despite its natural assets—white sands, lush rainforests, majestic mountains, and colorful reefs—and proximity to the mainland, Fitzroy Island remains on the DL. “While the masses are headed to Whitsundays, you’ll feel serene as you catch some rays on Nudey Beach,” jokes Hudson. (Remember your swimsuit, because it’s not actually clothing optional.)

Set in the west-central Pacific Ocean, 144 miles of north of the equator, Kiritimati is the largest coral atoll (aka a ring-shaped coral reef) on the planet. This postcard-perfect escape is blessed with 30 miles of lagoon shoreline and a far-flung location that keeps it blissfully uncrowded. Expect deserted surf breaks and wide-open expanses for fly fishing.

Fernando de Noronha is an exclusive haven of ecological diversity, off the northeast coast of Brazil. Government regulations are behind its relative anonymity. To preserve and protect this UNESCO World Heritage Site, only 500 people are granted access each day. The lucky few get to gawk at dramatic rock formations and snorkel with spinner dolphins.

Just under three hours south of Barcelona lies Benicàssim. More often frequented by in-the-know locals than international travelers (with the exception of the summer music festival), this Costa del Azahar gem boasts miles of gorgeous beaches linked by a picturesque promenade. Bringing the kiddos? Check out Aquarama, an amusement park with a towering slide.

Wedged between the holiday hot spots of Amalfi and Positano, Furore is all too often overlooked. (Road-trippers tend toward its notable neighbors.) But this tiny town is well worth a pitstop. Instead of grand piazzas, you’ll find houses clinging to rocky cliffs, olive groves and a hidden cove that’s guaranteed to get a lot of likes on Instagram.

You’d assume turquoise waters and pristine beaches would make Providencia wildly popular, however its isolated location and limited means of transport deter many folks. To reach this covert arcadia, visitors have to fly into San Andrés and take a boat or 15-seat plane the rest of the way. And yes, it’s totally worth the effort.

Port Olry impresses with its swaying palm trees, azure tides and hilltop vistas. This petite French-speaking village, on the island of Espiritu Santo, also happens to be off-the-beaten path and has some intriguing natural attractions. Whether you want to swim with turtles, go on a scenic hike or laze in a shaded hammock, paradise is just a plane ride away.

Perched on the southern shores of Jervis Bay Marine Park, this seaside hamlet of just 112 residents promises white sands and calm currents. And if that wasn’t enough, it also offers year-round dolphin watching, and you can peep humpback whales during their annual migration (between May and November).