5 Fun Things to Do in Saas-Fee Switzerland in Summer 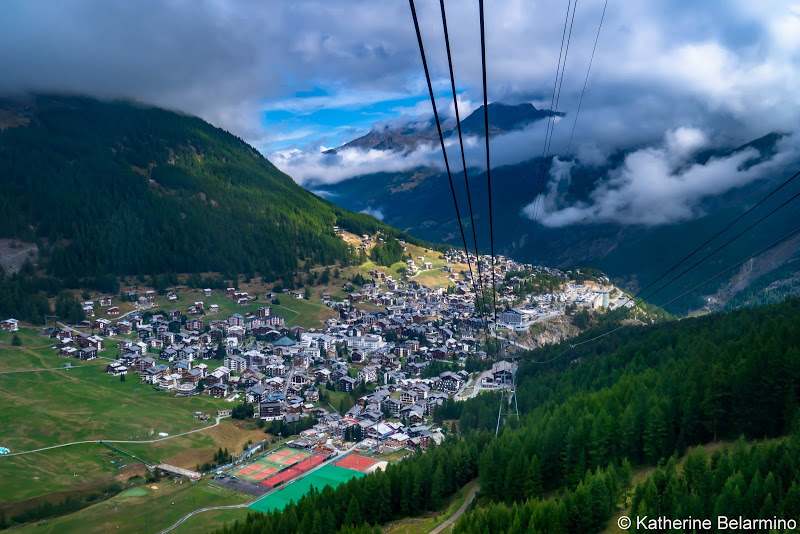 by Katherine and Romeo Belarmino

Saas-Fee is a premier skiing village in the Valais region of Switzerland, so why were we traveling to Saas-Fee in summer?  It wasn’t for the skiing, though Saas-Fee is unique because you can ski there year-round.  While winter is Saas-Fee’s most popular season for travelers, summer is less crowded and there are many fun things to do in Saas-Fee in summer.

Saas-Fee is one of those little Swiss villages that is a tourist destination, yet doesn’t feel touristy.  This is especially true in the summer.  Because no cars are allowed, the streets are for people leisurely walking or biking, with only the occasional small electric vehicle used for deliveries or trash collection. 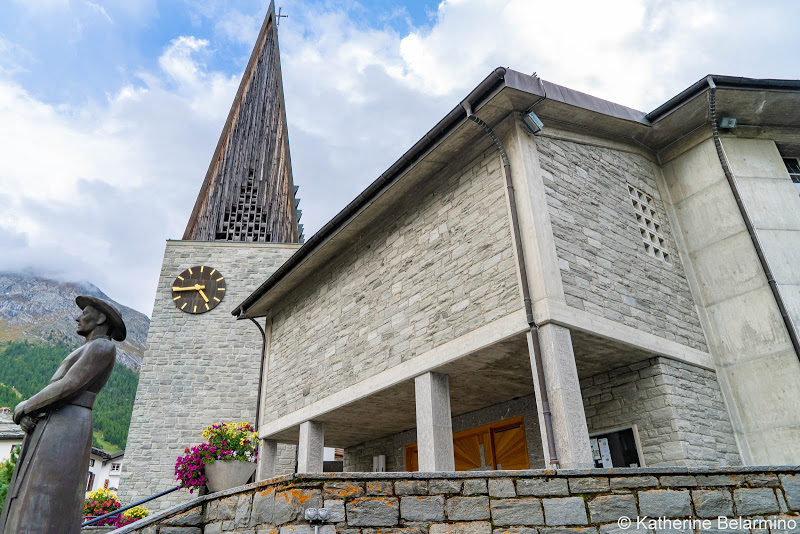 Saas-Fee used to be an agricultural village, and its past citizens weren’t all that excited by the idea of inviting travelers.  But Father Johann Josef Imseng was passionate about the mountains and loved leading visitors to the mountain peaks.  The first visitors to Saas-Fee stayed in the vicarage.  Father Imseng knew that tourism would be a good source of income for the locals, so persuaded the farmers to open guest rooms in their houses.  The first hotel was built in Saas-Fee in 1881. A road to Saas-Fee was finally built in 1951 and the first cable car systems were constructed.  From there Saas-Fee’s winter sports tourism grew, and today Saas-Fee is a world-renowned resort. 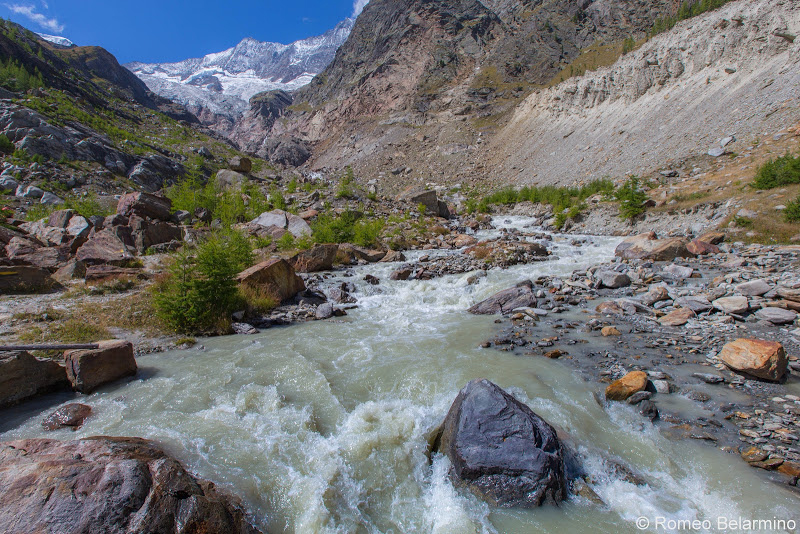 So, what are the fun things to do in Saas-Fee when it isn’t covered in snow?  They include traversing a via ferrata, hiking, exploring the caverns of a glacier, riding a toboggan, and feeding marmots.

Traverse the Gorge-Alpine Via Ferrata 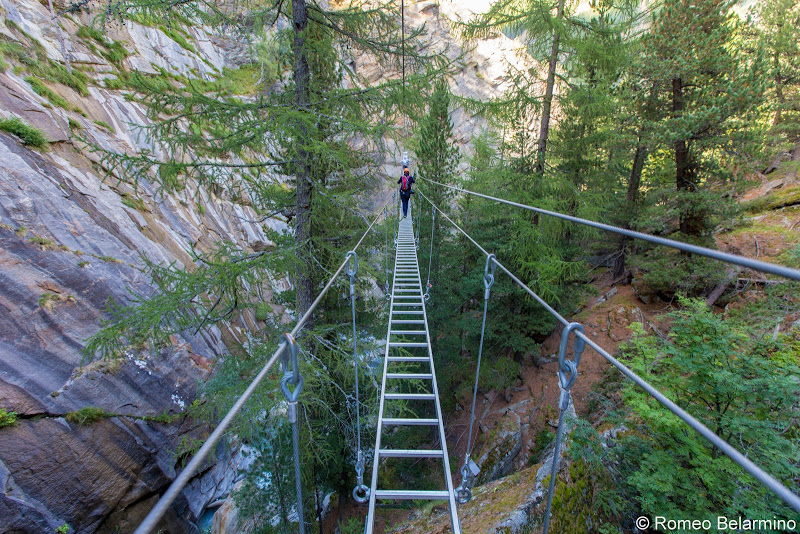 The most exciting thing to do in Saas-Fee is to embrace the adventure of the Gorge-Alpine Via Ferrata.  Via ferrata is Italian for iron path.  Via ferratas are protected climbing routes found in the Alps and other places.  A steel cable follows the route, fixed to the rock in intervals, so that climbers can constantly be safely secured.  Climbing aids include iron pegs, iron rungs, wood planks, ladders, and suspended bridges.  Via ferratas range in difficulty from easy to very difficult and can be done on one’s own or with a guide. 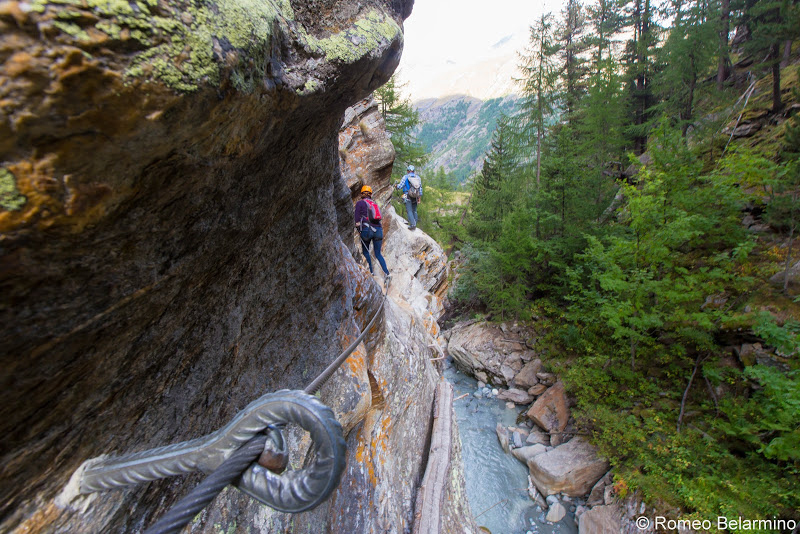 The Gorge-Alpine Via Ferrata is on the easier side of the spectrum and can only be visited with a guide.  Romeo is afraid of heights (or afraid of falling from great heights to be more accurate), so I didn’t know if I’d get him to go with me.  But then I found the Saas-Fee Guides’ video which shows a child traversing the via ferrata, and there was no way he could say no then. 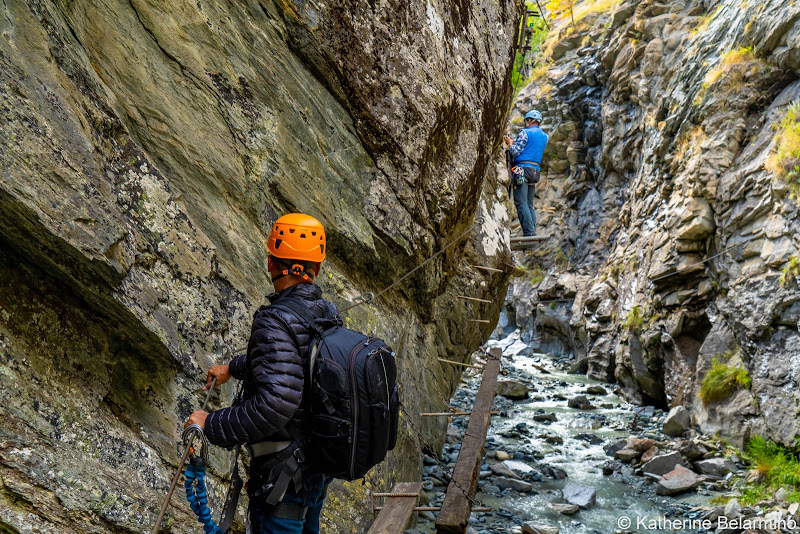 The via ferrata is accessed through what’s kind of like a secret entrance.  A tiny stone watchtower actually has stairs leading down from the inside into the gorge.  From there the adventure begins.  This particular via ferrata has canyons, caves, waterfalls, and a river. 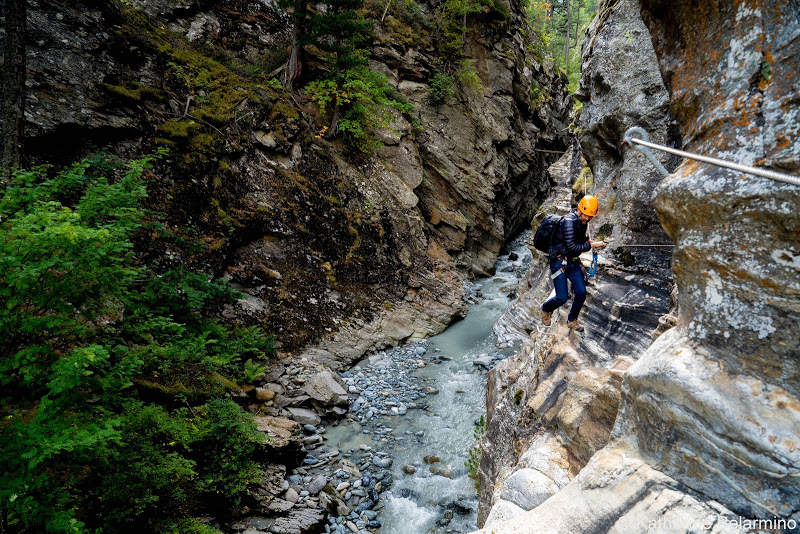 Probably the most nerve-wracking pieces are the long ladders, used as suspension bridges, which we slowly used to cross from one side of the gorge to the other, stepping carefully rung by rung.  But even then it was easy to be distracted by the milky aqua water running below.  There are also multiple zip lines, one of which leads into the mouth of a cave, a Tarzan swing, and a chance to repel from one of those crazy ladder suspension bridges. 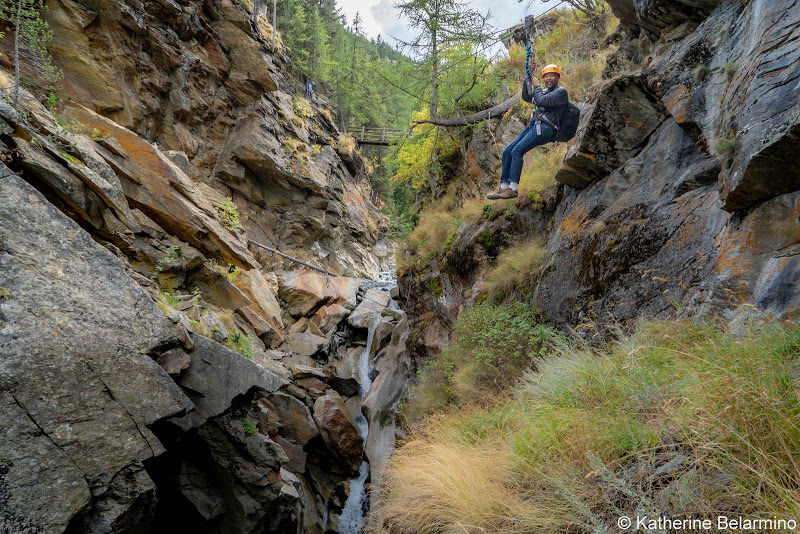 Because we were always hooked to the safety cable, and because we were with an extremely knowledgeable guide, we always felt perfectly safe, and the trip was exhilarating.  I had a smile on my face the entire time, and so did Rome.  About halfway through, while negotiating some tricky footwork, he yelled out at me, “I’m okay with this!” 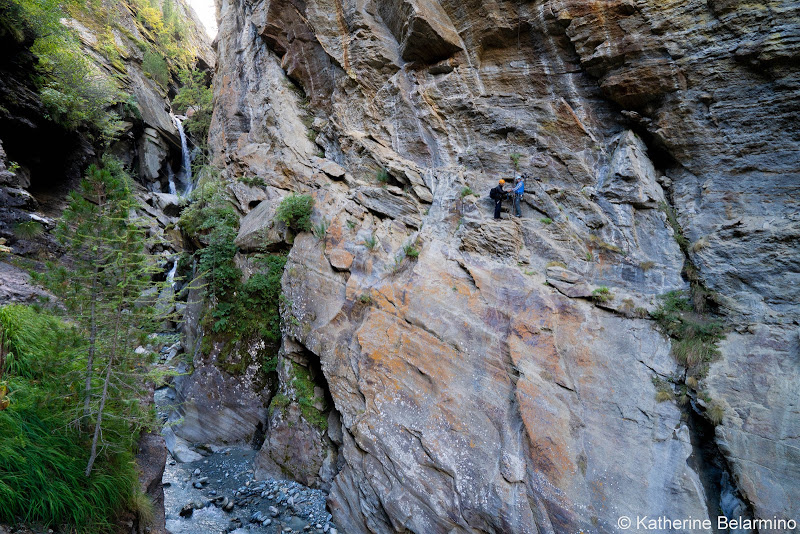 The great thing about the Gorge-Alpine Via Ferrata is that it can be explored in the summer and winter, though the winter version is shorter.


While Saas-Fee has numerous ski trails in winter, it also has numerous hiking trails in summer.  One of the best hikes in Saas-Fee is the Gemsweg, also called the Chamois Trail after the goat-antelopes that can be spotted in the area. 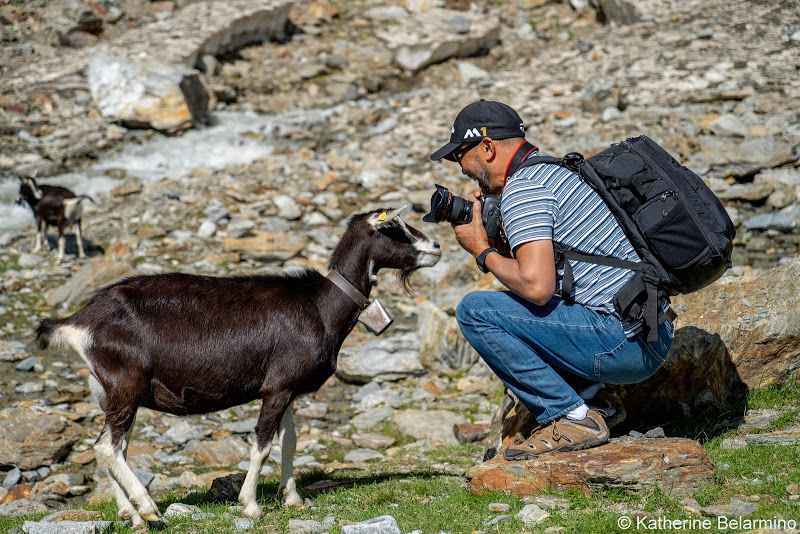 We hiked from the Hannig gondola summit station to the Gletschergrotte before heading back down to Saas-Fee.  The Gemsweg trail wraps its way around Saas-Fee, hugging the midpoint of the surrounding mountains.  The trail crosses rivers and provides views of mountain peaks and glaciers above and the valley and village below.  We encountered sheep, goats, and marmots. 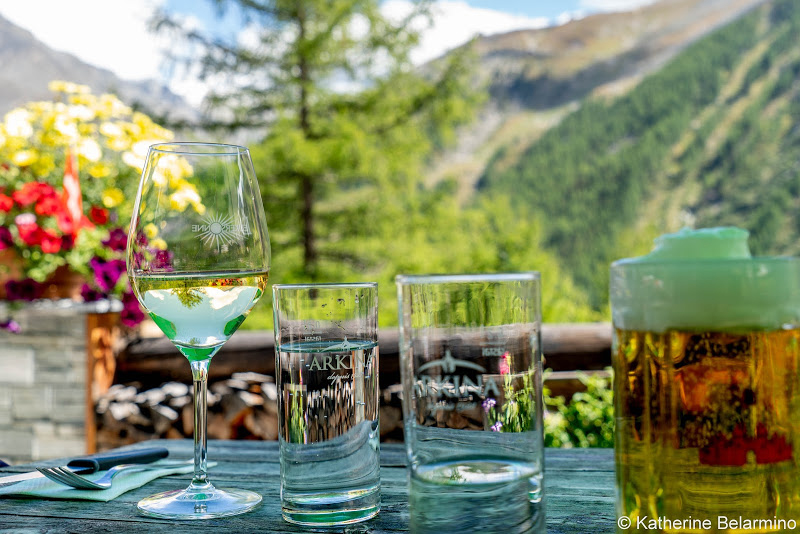 Taking the four-mile trail in this direction meant most of the hike was flat or at a slight decline, though there were a few spots with a steep decline, and if you decide to visit the Gletschergrotte restaurant, first built in 1931, before heading back into Saas-Fee, there will be a short but steep hike up to the restaurant.  However, the prize is a glass of Valais wine and maybe some sort of Alpine cheese dish, so the ascent is worth it. 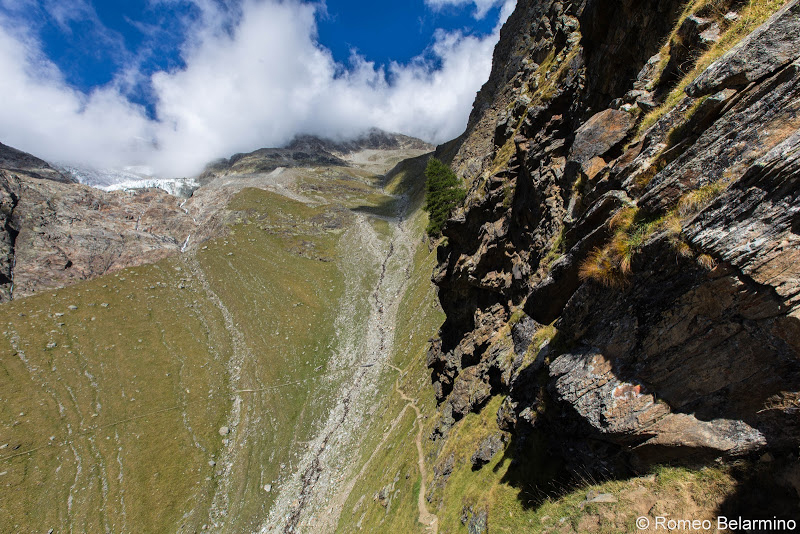 For more of an adventure, instead of hiking back into Saas-Fee from Gletschergrotte, hikers can continue on to the Plattjen ridge, which will involve hiking uphill.  The great thing about Swiss hiking trails is that they are very well-marked so you can choose your own adventure.

Take a Trip to Mittelallalin 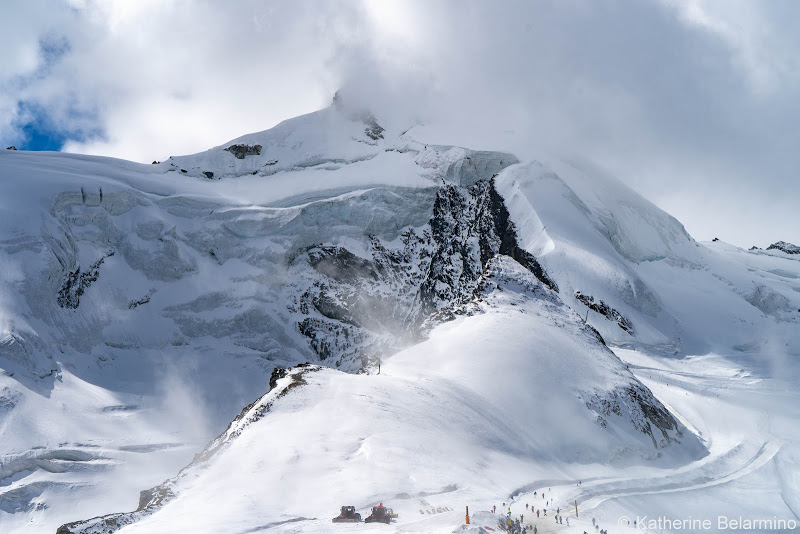 Mittelallalin is 3,500 meters above Saas-Fee and is accessible by the Metro Alpin, the highest underground train in the world.  At the top is a winter playground, even in the middle of summer.  This is where ski students come to ski year-round.  But Mittelallalin isn’t just for skiing and snowboarding. 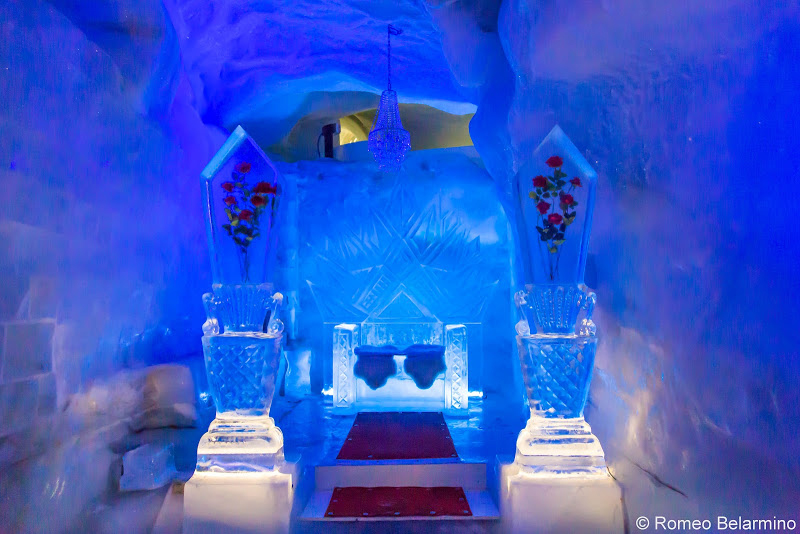 Mittelallalin offers views of glaciers and peaks of the Italian and Swiss Alps.  There’s the Ice Pavilion, the largest ice grotto in the world, which is inside the 2,000-year-old Fee Glacier.  There’s also the world’s highest revolving restaurant and coffee bar, a great place for lunch.  It takes about 50 minutes for the restaurant to make a full rotation.  Swiss Glacier World is probably the highest playground in the world (the signs literally say “probably”).  Swiss Glacier World has a zip line, tubing, a ropes course, and a ski-doo park. 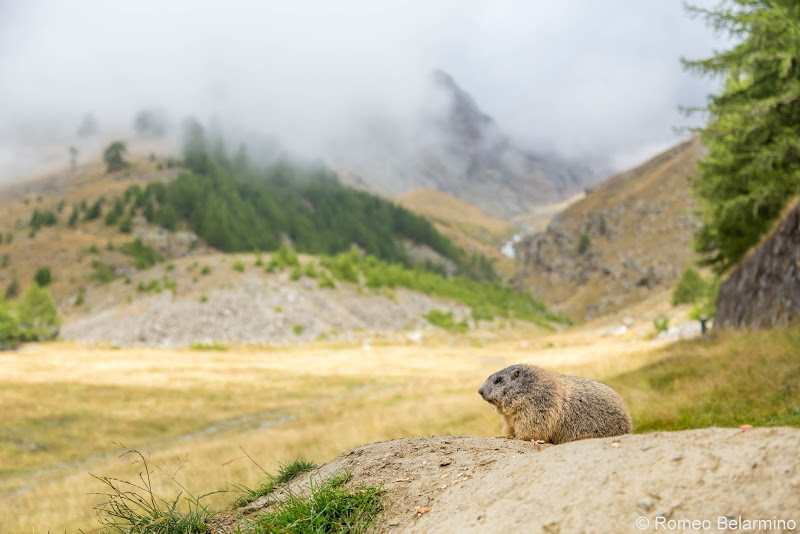 One of the funniest things to do in Saas-Fee that will probably bring the most smiles is feeding marmots.  Marmots are in the large ground squirrel group (in the US marmots are commonly called woodchucks or groundhogs).  Alpine marmots live in rocky, mountain areas and can be found throughout the Valais region. 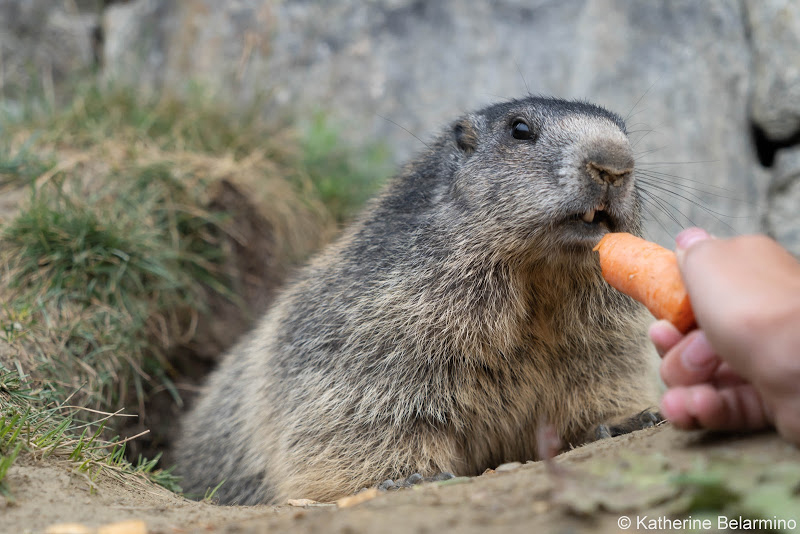 There’s a field in the southwest end of the village of Saas-Fee where some friendly marmots are happy to come out to visit in exchange for some carrots and peanuts.  Someone at the Saas-Fee tourist office, across from the bus station, can tell you where they can currently be found.  The Saas-Fee marmots are adorable and friendly, though also a little skittish.  Once you’ve enticed them out for your treats, stay quiet and calm so they don’t get spooked. 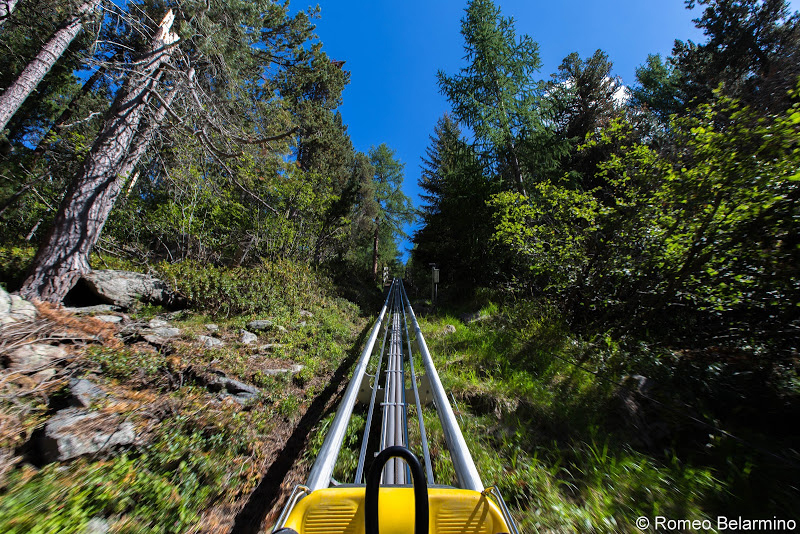 Ever since we saw a Rick Steves Switzerland episode where he rode on a summer toboggan, we’ve wanted to do the same.  It looks so silly and yet so fun.  We finally got the chance in Saas-Fee.  If you’re not familiar with a toboggan, it’s kind of like Olympic bobsledding, but on a tiny little cart that hurtles down a winding rail.  The Feeblitz toboggan run has the steepest toboggan lift in the Alps and can reach speeds of 40 kilometers per hour.

Where to Stay in Saas-Fee 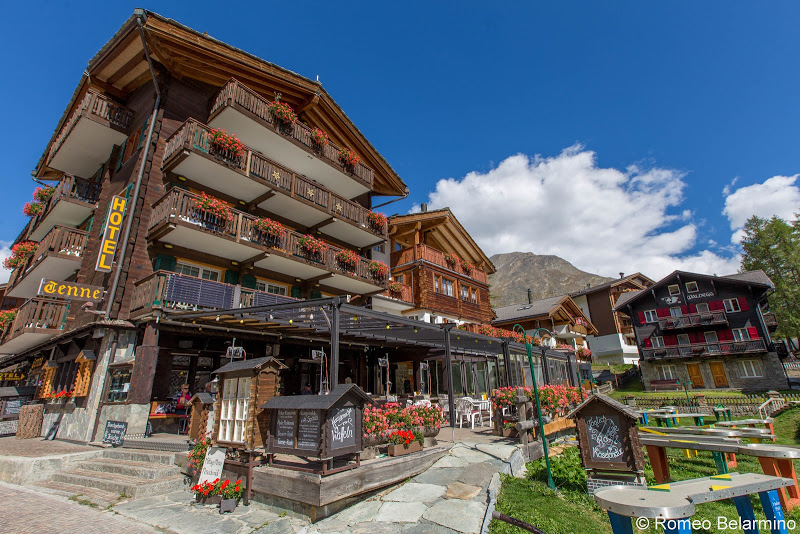 For our two days in Saas-Fee we stayed at the Hotel Tenne, a family-run hotel.  Hosts Richard and Emanuela Berchtold-Bumman are kind and gregarious.  The hotel is located just a couple blocks from the bus stop, making it very easy to get to, even with luggage.  A couple blocks up is probably the best restaurant in Saas-Fee, and a couple blocks down is a sausage shop and a cheese shop, both good places to buy souvenirs to bring home. 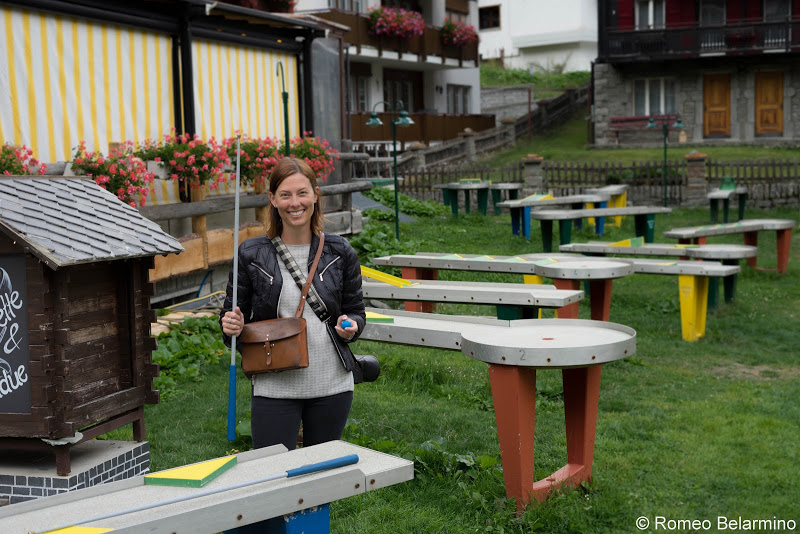 Hotel Tenne has its own restaurant and bar, complete with large outside patio.  A buffet breakfast is laid out for hotel guests every morning.  The bar is open for a glass of one of the Valais region’s unique wines after a day in the outdoors, and sometimes there’s a live band playing traditional Swiss tunes for additional entertainment.  In the lawn is a sort of miniature golf billiards game made of tables with a hole at the end and obstacles separating the ball from the hole.  The ball is hit with something similar to a billiards cue.

Where to Eat in Saas-Fee 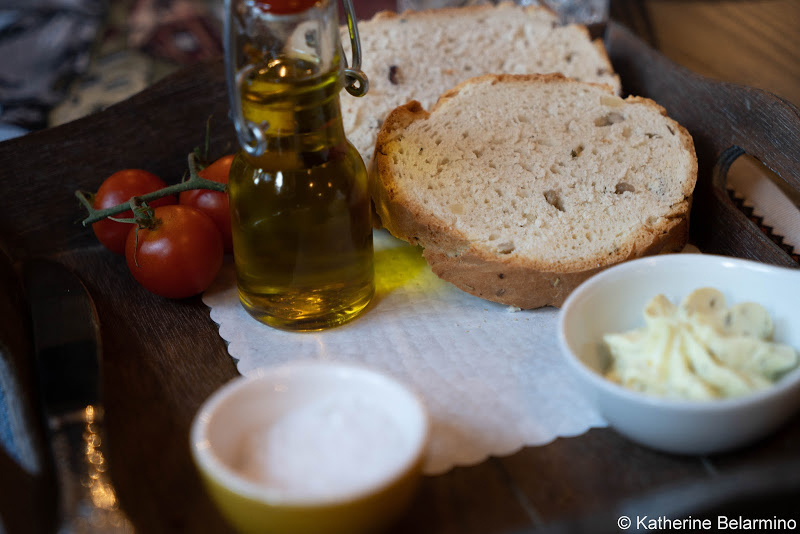 Our favorite restaurant in Saas-Fee was Essstube, a short walk from Hotel Tenne.  The restaurant has a fun, eclectic interior, and they clearly pay a lot of attention to the food.  While we figured out what to order, we received a wood tray with slices of fresh bread, good olive oil, cherry tomatoes fresh from a garden, herbed butter, and a tiny bowl of salt. 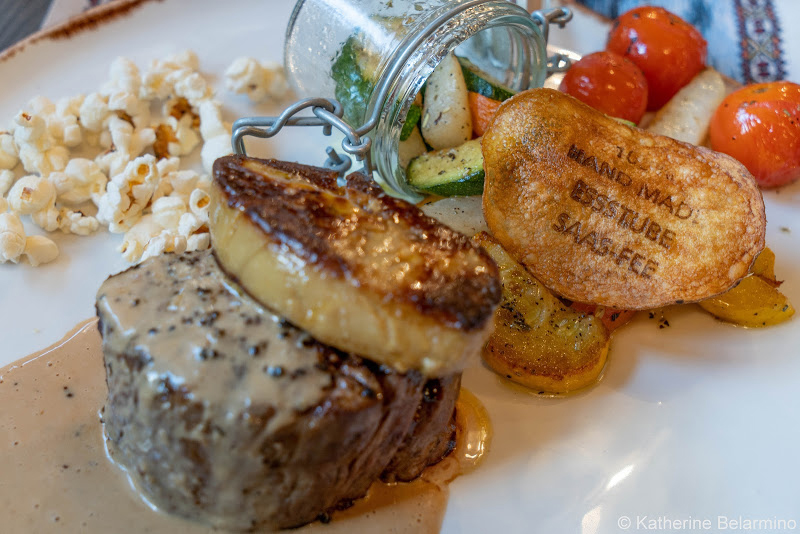 Dinner can be as homey or fancy as you want it.  Romeo ordered the schnitzel while I ordered the steak topped with foie gras and cognac-truffle sauce.  Both came with a jar of roasted seasonal vegetables spilling out, a soupçon of salted popcorn, and a potato chip branded with the name of the restaurant.  Dessert was an unusual black pepper sorbet with a raspberry coulis. 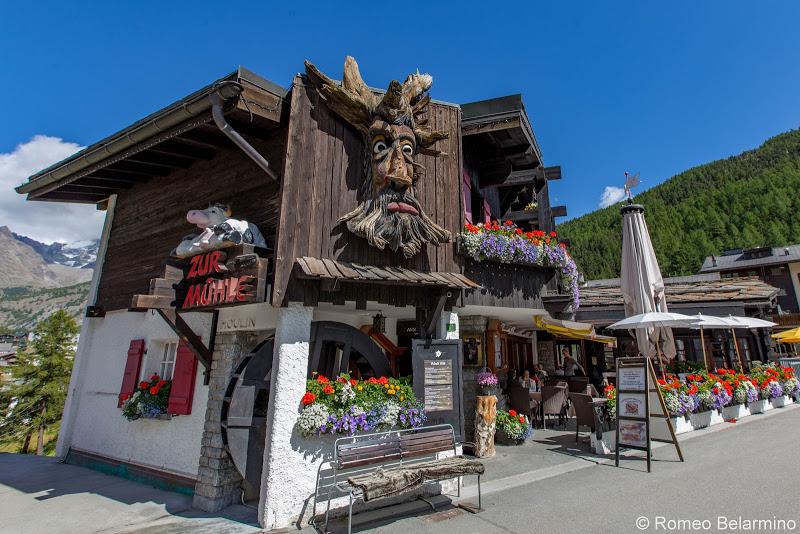 Another great restaurant in Saas-Fee is Zur Mühle, a cute bovine-themed restaurant with cow-print curtains, cow bells hanging from the ceiling, and a mesmerizing wooden sculpture of a bearded face on the outside.

Zur Mühle serves market-fresh and seasonal products.  They are known for their fondues, rösti, and beef dishes.  Beef dishes are made with Eringer beef.  Eringer cows are one of the smallest cattle breeds.  The females are known for being aggressive and are used in cow fights in the Valais region.  Eringer cows spend most of their time outside in the Alps grazing.

How to Get to Saas-Fee

While most places in Switzerland are easily accessible by train, Saas-Fee was the only village we visited in the Valais Matterhorn region that required a bus ride.  The transfer from the train at the Visp station to the 511 bus is easy, and the bus has a place for luggage below.  Note that the bus stop for the 511 to Saas-Fee is at the very east end of the Visp train station.  Travel on both the train and bus are covered by the Swiss Travel Pass. 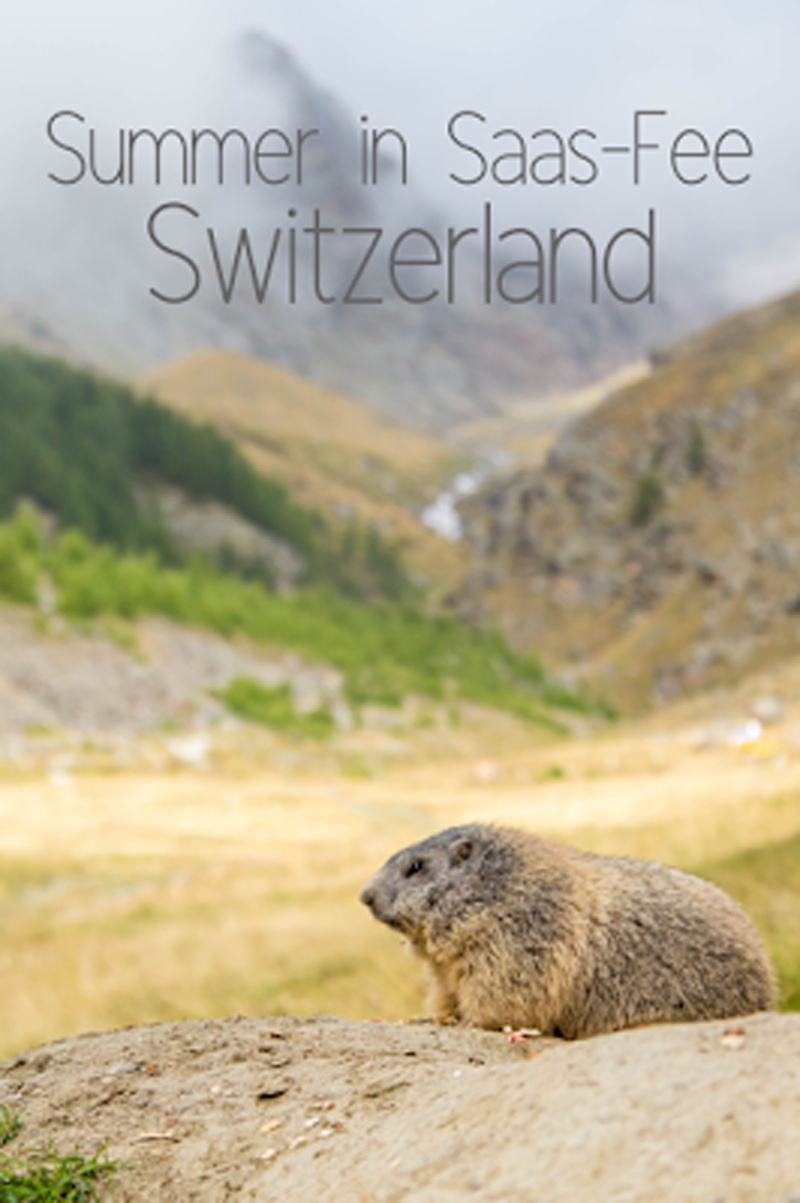 Thank you to Valais Wallis Promotion, Switzerland Tourism, and Saastal Tourismus for hosting our time in Saas-Fee and making this article possible.  As always, all opinions are our own.  This article contains affiliate links.  If you purchase through them it costs you nothing extra and we earn a small commission which goes towards this website and bringing you more travel stories.