10 Real People Share How They Turned Their Marriage Around 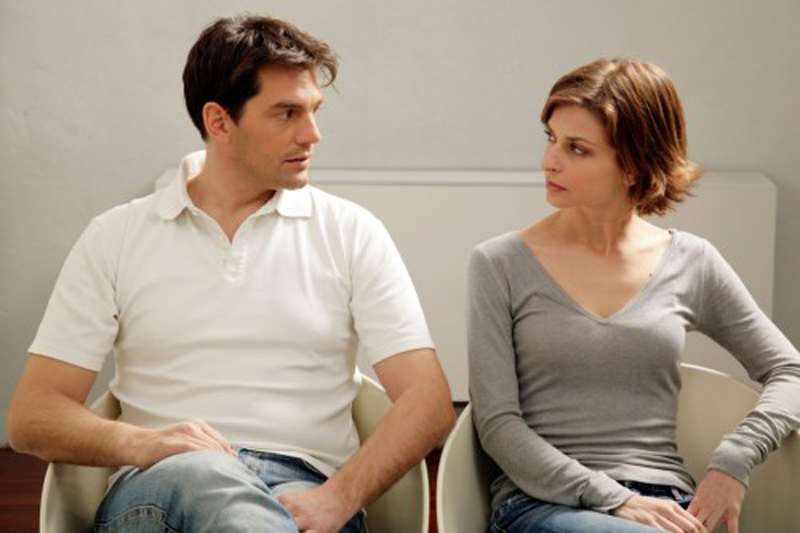 Every marriage is different, but they all have one thing in common: No matter how much you love each other, you’re bound to hit a rough patch sooner or later. The good news is that once you figure out a way to get through the issue, your marriage will be stronger than ever. And you can get to that other side. Read on for some great tips from real people on what they did to turn heir marriage around. And for more great advice, check out what these 20 people learned from relationships that failed.


Get a Room of Your Own

“I married the loudest mammal in the universe,” Megan says of her husband, whom she’s been married to for two years. They met on Tinder and they’re blissfully in love, but there’s one problem: He snores. “I used to think I would end up on 60 Minutes at some point for suffocating him in his sleep,” she says. Their saving grace? A second bedroom.

“I usually fall asleep with him, but get up in the middle of the night and move into the other room if he starts to snore,” she says. People tend to think that having separate beds is a sign of marital issues. But people often like to sleep at different temperatures, and if one person is a snorer or a blanket hog, it can cause some serious fights. So for some couples, separate beds are more than worth it. Plus, having her own bed gives Megan the added perk of being able to curl up with her pup, which a recent study found is a great sleeping aid for women.

Michael, 42, says it’s important that couples know it’s OK to be selfish because being more fulfilled can make you happier in your marriage. “You could call me a selfish husband or call my wife a selfish wife,” says Michael, who’s been married for 12 years. “We don’t watch TV together; we watch shows on our own schedules. We don’t eat meals together; she’s often teaching yoga at dinnertime. And we don’t go to the clubs together or see the same friends,” he says. “We enjoy those things together when our interests overlap, but give one another the space to do it alone. So we’re growing while together, but not feeling ‘stuck’ together.”

Philip Wagner—lead pastor of Oasis Church in Los Angeles—wrote a book called How to Turn Your Marriage Around in 10 Days, in which he shares some of the secrets of his 34-year marriage to his wife, Holly. “We had the romantic idea of [marriage], and when you find out that you have some real differences and there’s some work to do, most people think, ‘Maybe I married the wrong person’ or, ‘This shouldn’t be this hard,'” Wagner tells CBN.com. “The differences we had were so big they almost buried us. [But] we learned to honor those differences [and] respect them and see them as strengths and not as things I needed to change about her or she needed to change about me.” Philip is a bit of an introvert, and Holly is more outgoing, but instead of trying to remold one another’s personalities, they began to see their opposite personas as qualities that could make them stronger as a couple.

Philip also says that many couples don’t really understand what it means to “honor” someone. “It’s easy to honor someone when they’re new or you’re engaged, but [it’s] human nature to take each other for granted. I believe behind every marriage problem, there is an honor problem. Whether it’s finances or sexuality or differences, somebody is feeling dishonored. So I would dishonor or dismiss the things that were important to [my wife], and she would do the same with me. … You have to be honest with yourself and think, ‘How am I dishonoring her?’ And have those hard conversations where you say, ‘What is it that I do that makes you feel honored?’ and then reinvest in that.”

Samantha, 24, has only been married for a year, but people always say that the first year is the hardest, especially in the current economic climate. “Being younger and still at the beginning of our careers, finances are hard to navigate,” she says. “Sitting down, looking at what we spend, and on what and where we can make sacrifices, was huge. Sacrifice also means compromise, because we both had to give on things we may not have wanted to. You can’t blame the other person for any bad spends, because marriage is about the team and if you start ‘the blame game,’ you start to not take responsibility and create problems and resentments.”

Studies have shown that people’s personalities change after the first 18 months of marriage, and not always in the best ways. All those little quirks that you found so cute when you first started dating suddenly start to irritate you, and you find yourself bickering nonstop. That’s why Scott, 50, believes the thing that turned his marriage with his husband of four years around was the realization that he needed to put some real thought into whether an issue was important enough to warrant an argument or whether he could just let it go.

“Picking your battles and being willing to give in when you reach a stalemate is an important skill in managing a relationship,” he says. “There are going to be times when you have opposite views on something and are never going to come to agreement. Being willing to give in during some of those situations is an important negotiating skill throughout your relationship. There will be issues that you absolutely can’t give in on. Keep that in mind during other situations and be willing to compromise when it’s not that important to you.”

Scott says if something is continuously nagging at you, it is important to bring it up instead of letting it fester, because you can’t expect someone to read your mind. But, even then, you should always try to put yourself into the other person’s shoes. “One of the main reasons we fight is that we have our own perspective on something and see the issue through our lens,” he says. “By trying to imagine what it’s like on the ‘other side’ of the argument, you can gain insight into how your partner is feeling and how they might perceive a situation, leading you to sometimes change your position—or at least soften it—as a means to compromise.”

Amanda, 30, nearly got divorced a few years ago because her in-laws were driving her crazy. “It got to the point where my mother-in-law told me that I was raised with my mother ‘bringing men into and out of my life constantly,'” she says. The constant arguing put a toll on her marriage because, as is often the case in these scenarios, they couldn’t agree on how to handle the situation.

They tried family therapy, but ultimately the thing that helped the most was just not talking to her in-laws for a few years. “Choosing to not talk for a while wasn’t shutting the door on their existence forever. It was just giving everyone time to regroup,” she says. “Eventually, everyone realized they were just raging for the sake of raging.”

Jaimie, 33, says that the best piece of advice that she and her wife ever got was to “remember you’re on the same team.” Even doing an activity together—like playing a sport or a board game where you’re teammates—can help remind you that you’re on this journey called life together, not competing against each other.

She also says that “revisiting the place you fell in love—like first date restaurants, movie theaters, etc.—can bring back the sense memories you felt when you were in the honeymoon stage.” That can go a long way in reigniting the fire in a relationship that’s entered the companion stage. For more on this, find out what science says is actually the happiest point in your marriage. (Spoiler alert: It’s not the beginning!)


Get Off Your Phone

One of the biggest impediments to modern-day relationships is advancements in technology. A recent study found that 26 percent of American adults admit to being online “almost constantly.” Netflix is killing everyone’s sex life, and “phubbing”—the act of ignoring someone while flipping through your phone—can have devastating effects on your relationship. Bella, 30, found herself in this situation when her husband’s “phubbing” became a serious problem.

“He had a flip phone when we just met, so he was always present with me when we were together,” she says. “But, once we got married, I would come home and he wouldn’t even ask me how my day went because he’d be too busy scrolling through Twitter or watching videos on YouTube. And when I told him things, he wouldn’t hear me because he’d be buried in his phone.” For Bella, everything changed once she told her husband just how much his behavior was hurting her, and now they have a policy not to look at their phones when they’re spending the evening together. For more ways you could be negatively affecting your marriage, check out these things you’re doing wrong that will kill your marriage.

Masha, 28, felt like she’d won the lottery when she met a handsome doctor eight years ago. But, once they were married, she found that his career had its downsides. “He’s basically married to his job,” she says. So Masha decided to quit her job and create a family business with him, so they could work together. “It’s not about me letting go of my dream to save a relationship. I never sacrificed anything,” she says. “I was looking for a new exciting project and just thought that his job could benefit from my skills.”

As much as combining her career goals with his helped, Masha also says that what turned their marriage around the most was the fact that she realized that “men are humans with feelings and backgrounds. They don’t owe you anything and are not means of establishing a picture-perfect relationship that you’ve been dreaming of since puberty. Ever since that realization dawned on me, our life became so much easier.”

In his article “How I Saved My Marriage,” writer Richard Paul Evans describes the few words that changed everything for him and his wife, for the better. One day, he asked his wife, Keri, one simple question, “How can I make your day better?” She became defensive and cynical. So he took matters into his own hands and cleaned the garage. Then he asked the same question the next day, and the day after that, and so forth, until she finally broke down. “The walls between us fell. We began having meaningful discussions on what we wanted from life and how we could make each other happier,” he writes.

“We didn’t solve all our problems. I can’t even say that we never fought again. But the nature of our fights changed. Not only were they becoming more and more rare, they lacked the energy they’d once had. We’d deprived them of oxygen. We just didn’t have it in us to hurt each other anymore.” For more on how much small gestures matter, read this heartwarming viral thread about the little quirks people adore about their loved ones.