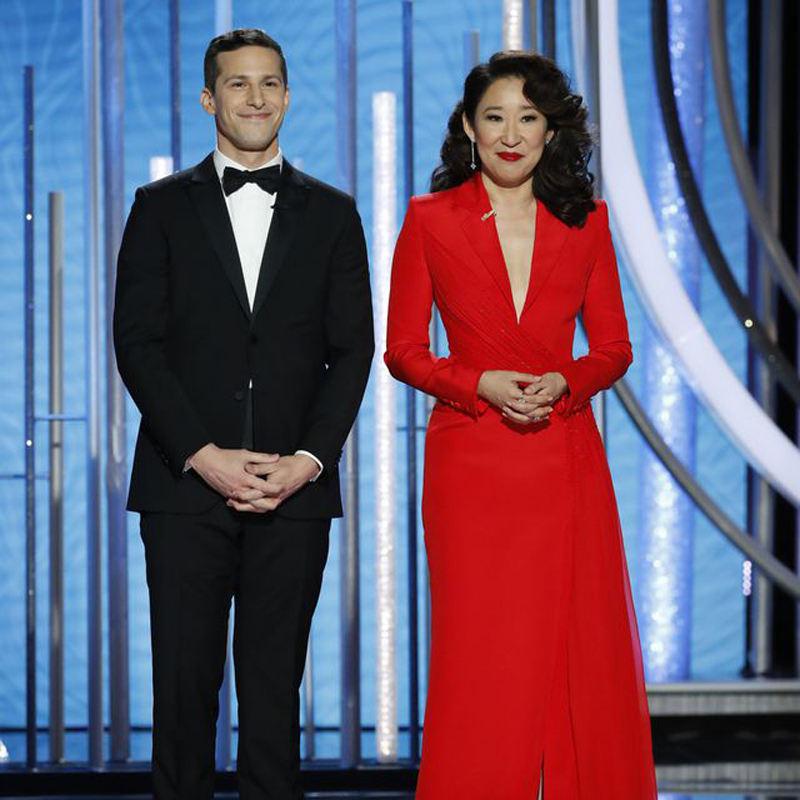 Sandra Oh is no stranger to the Golden Globe stage. In 2006, the Grey's Anatomy alum won a Golden Globe for best supporting actress in a drama for her role as Christina Yang in the cult-favorite medical drama. But this year, not only is Oh back at the Golden Globe (she already walked away with another win for best performance by an actress in a television series for Killing Eve) she's also making history as the first-ever actress of Asian decent to host the prestigious awards (alongside Andy Sandberg)—and there was no shortage of jaw-dropping outfits.

From her red carpet arrival to hitting the Golden Globe stage, see all of Sandra Oh's looks below.

First up, Sandra Oh arrived at the 2019 Golden Globe red carpet in a stunning white floor-length Versace gown with exaggerated shoulders. Oh's stylist, Elizabeth Saltzman, made a conscious effort to dress the Golden Globe nominee in all-female designers. "I called the women’s gang. I called Stella McCartney. I called Donatella Versace,” Saltzman told People. “She’s wearing all female designers, but that’s not a statement from her or from me. It was a way for me to think about her and how I respect her.”


Then there was the the fiery red, floor-length blazer dress Oh wore during the award show's opening monologue.


Later in the evening, Oh swept up a Golden Globe award for best performance by an actress in a television drama for her role as Eve Polastri in Killing Eve and accepted her award in a white Stella McCartney dress with a bateau neckline and sequined arm sleeves.